What's the difference between an orthodontist and a dentist? 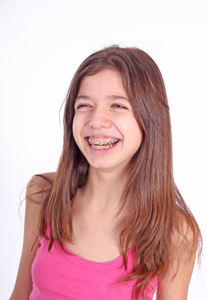 Orthodontists and dentists both help patients improve their oral health, but in different ways. Dentistry is a broad medical specialty that deals with the teeth, gum, nerves, and jaw, while orthodontics is a specialty within dentistry that focuses on correcting bites, occlusion, and the straightness of teeth. One important difference is that all orthodontists like Dr. Mark Garlington are dentists, but not all dentists are licensed orthodontists.

How are they similar?

The main similarity between a dentist and orthodontist is that they both focus on oral care. An orthodontist can work in a dental office and provide the same care as a dentist. So in this respect, they are quite similar. They are both considered doctors, and deal with the teeth and gums.

How are they different?

There are more differences than similarities. An orthodontist requires additional schooling as a dental specialty; the situation is similar to a doctor who obtains additional schooling to become a surgeon. Another difference is that orthodontists specialize in helping patients with the alignment of their teeth, improving their bite, or fitting them for corrective braces and devices. If a patient has an overbite, a dentist will refer him or her to an orthodontist.

Orthodontists are dentists that specialize in the alignment of teeth, and provide services related to:

What an orthodontist can help with

Orthodontists help with crooked teeth, but they assist patients with other issues as well. These include overbites and underbites, crossbites, spaces between teeth, overcrowding of teeth, and the treatment of temporomandibular disorders (TMD). Additional problems with the jaw also need to be treated by an orthodontist.

While a dentist may be trained to provide orthodontic care in addition to extractions, TMJ treatments, and fillings, trusting your smile to an orthodontist can better balance the different procedures you require.

To learn more about the difference between dentists and orthodontists, or to schedule an initial consultation with Dr. Mark Garlington, please give our team at Dr. Mark Garlington Orthodontics a call at our convenient Long Beach, California office.

Your First Winter in Braces? Tips for a Warm and Wonderful Holiday 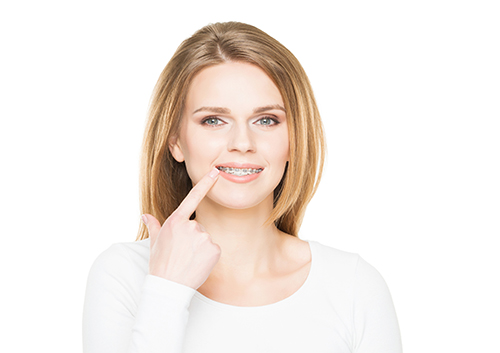 If this is your first winter with braces, you might be wondering how to make the best of the holiday season. Dr. Mark Garlington and our team have some suggestions for happy and healthy holiday smiles.

Winter means tasty holiday treats, and just because you wear braces doesn’t mean you need to step away from the holiday table! You can enjoy your favorites if you remember to check your list for the usual problem foods. Hard, crunchy, chewy, and sticky items? Naughty list.

Luckily, there are plenty of nice alternatives.

We’re happy to provide recommendations for braces-friendly holiday foods. And we don’t expect you to turn down every sweet treat this season.  Just be sure that if you enjoy something sugary, brush carefully after indulging.

While you’re decking the halls, or pinning up the New Year’s balloons and streamers, or even choosing a great holiday outfit, don't forget that your ligatures can be decorative as well as functional.

Check out our ligature colors for the best possible choices for your teeth and coloring. Take advantage of these options to create a fresh, confident look for the season. Give others the gift of your smile!

Winter comes with some special reminders about your dental health.

If you have any questions about your braces, in this season or any other, just ask when you visit our Long Beach, California office. Your beautiful, healthy, and confident smile can make this the most wonderful time of the year!

When Americans sit down to dinner on the last Thursday of November, the day that Abraham Lincoln designated as the day on which Thanksgiving would be celebrated, they do so thinking that the first Thanksgiving feast was held at Plymouth in 1621. According to National Geographic, the Spanish explorer Francisco Vásquez Coronado and his men celebrated a feast of Thanksgiving in Texas in 1541, giving Texas the distinction of being the first place where Thanksgiving was celebrated.

Native Americans had rituals around which they celebrated in hopes of ensuring a bountiful harvest. The Cherokees had a Green Corn Dance that they did for this very purpose. The Pilgrims (not to be confused with the Puritans,) rejected any type of public religious display. They held a three-day long non-religious Thanksgiving feast. Although they said grace, the focus of their celebration was on feasting, drinking alcohol (they did have beer,) and playing games.

The Pilgrims at the Plymouth Plantation celebrated a different day of Thanksgiving in 1623. Plagued by a crop-destroying drought, the settlers prayed for relief. They even fasted. A few days later, they got the rain they so desperately needed. Soon thereafter, they received another blessing when Captain Miles Standish came with staples they couldn't otherwise get. He also told them that a Dutch supply ship was en route. In gratitude for the abundance of good fortune, the Plymouth settlers celebrated a day of prayer and Thanksgiving on June 30, 1623.

The Story of Squanto

No discussion of Thanksgiving is complete without a discussion of Squanto, or Tisquantum, as he was known among his people, the Patuxet Indians. It is believed that he was born sometime around 1580. As he returned to his village after a long journey, he and several other Native Americans were kidnapped by Jamestown colonist, Thomas Hunt. Hunt put them on a ship heading to Spain where they were to be sold into slavery.

As fate would have it, some local friars rescued him and many of the other kidnapped natives. Squanto was educated by the friars. Eventually, after asking for freedom so he could return to North America, he ended up in London where he spent time working as a ship builder. By 1619, he was finally able to get passage on a ship headed to New England with other Pilgrims.

Upon arriving at Plymouth Rock, he learned that his entire tribe was wiped out by diseases that accompanied earlier settlers from Europe. In gratitude for passage on their ship, he helped them set up a settlement on the very land where his people once lived. They called the settlement Plymouth. Since they knew nothing about how to survive, let alone how to find food, Squanto taught them everything, from how to plant corn and other crops, how to fertilize them, how and where to get fish and eels and much more.

After a devastating winter during which many settlers died, thanks to Squanto's teaching, they had an abundant harvest. After that harvest, they honored him with a feast. It is this feast of 1621 which was celebrated between the Pilgrims and Wampanoag Indians that is widely considered the first Thanksgiving celebration.

About the Meal of the Plymouth Settlers

Surviving journals of Edward Winslow that are housed at Plymouth Plantation indicate that the first Thanksgiving feast was nothing like what Americans eat today. The meal consisted of venison, various types of wild fowl (including wild turkey,) and Indian corn. There were no cranberries, stuffing, pumpkin pie, potatoes, or any of the other “traditional” foods that appear on modern menus.

Today, Thanksgiving is celebrated on the fourth Thursday of November, the day that Abraham Lincoln designated as the holiday. It is still a day of feasting, and for some, a day of prayer and thanksgiving. For others, it is a celebration of gathering, especially for families. Still others may celebrate in entirely different ways, including watching college football bowl games, or by playing family games.

If you ever wonder why you're so tired after the Thanksgiving meal, it's because turkey contains an amino acid, tryptophan, and it sets off chemicals whose chain reaction combine to make people sleepy. 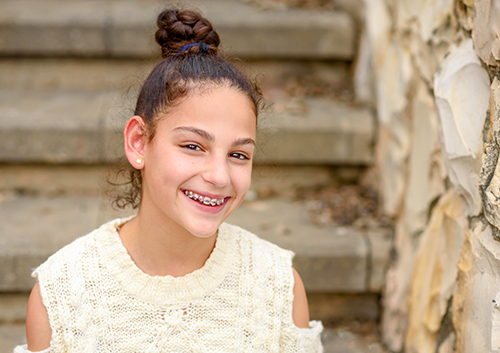 By now, you’re very familiar with the basic building blocks of your braces. Brackets, wires, and ligatures are no mystery to you. But suddenly, you’re hearing a brand new term—“power chains.” What exactly are these power chains, and why does your orthodontist think you need them? Let’s see how power chains are *linked* to your orthodontic treatment.

They’re not really chains in the necklace or bike chain sense—in fact, they’re only very rarely made with metal. These chains are most often a string of O ring loops just like your elastic ligatures, attached in a row to resemble a chain.

Chain lengths are tailored to your specific needs. Dr. Mark Garlington will attach each individual loop in the chain around a single bracket, linking selected teeth together. Chains might stretch across a few teeth, several teeth, or your entire upper or lower arch.

Because these chains are usually made of the same elastics that your ligatures, or bands, are made from, they want to hold their original shape. They will try to return to that original shape even as they are stretched between your brackets. As they contract, they help move your teeth together.

Over time, just like an over-stretched rubber band, they lose their elasticity, and won’t work as effectively. That’s why you’ll probably get a new power chain whenever you come in to our Long Beach, California office for an adjustment.

This is the most important question. How can a power chain improve your smile?

Usually, power chains become part of your treatment after the first phase of alignment. They can be used to help align your teeth or correct your bite, but are most often used to close gaps between the teeth.

You might have a gap after a tooth has been extracted. Or, as your teeth move into their new positions, you might suddenly see noticeable spaces between them. Power chains move the teeth closer together to eliminate these gaps, and do it more quickly than brackets and wires alone can do.

This is something Dr. Mark Garlington will discuss with you. Whether it’s a matter of weeks or months, your treatment plan is designed to move your teeth into their best positions, and to do it carefully for a lasting, healthy alignment.

Depending on the size and spacing of your teeth and your treatment plan, these chains usually take one of three forms: closed/continuous, short, and long. The only difference is the distance between the rings.

We will choose the type of chain that’s best for your treatment. Your contribution is to personalize your power chain. Power chains come in a rainbow of colors, allowing you to mix and match. You can even coordinate with your ligatures if you have ties as well as chains. If your goal is to have your braces blend in, various shades of white, silver, or clear colors are available. Want to mix things up? Choose a different color with every adjustment.

You might experience some discomfort for the first few days with a new power chain, just as you might with any adjustment. Dr. Mark Garlington will have suggestions for making those first days as comfortable as possible.

Also, like brackets and ligatures, power chains can trap food particles, so be sure to follow our instructions for keeping your teeth and your braces their cleanest.

Now that you’re all caught up on what power chains are and what they can do for you, let’s mention one more benefit. This is a process where you can actually see the gaps between your teeth closing over the weeks you wear your power chains. Keep a selfie record of your progress as you create your beautiful, healthy smile. That’s an em*power*ing experience!